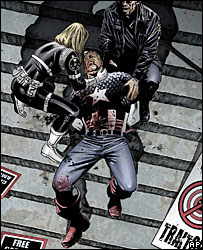 Co-creator Joe Simon told the New York Daily News: "It's a hell of a time for him to go, We really need him now."

Publisher Marvel Entertainment has confirmed it is developing a film based on the character.

Fans may not have seen the last of the character in print either, as the comic's editor-in-chief, Joe Quesada, refuses to rule out resurrecting him in the future.

The latest edition will show the superhero dying on the steps of a courthouse in New York, after he was shot by a sniper.

Since then, Marvel has sold more than 200 million copies of Captain America magazine in 75 countries.

bartendermo
Welcome to my world of making free money.